Historically, this event used to be held at the Civic Centre. However, this year and going forward, it was decided for the event to be held in schools instead, so that a larger number of students may be reached. The Green School for Girls was honoured to have been chosen as the first school in the borough to host the HMD on Monday 29th January 2018.

Key stage 3 students were invited to opt into the HMD. They were involved in preparatory workshops. As part of our Religious Studies for all our Sixth Form students, we dedicated one of the Moral Maze sessions to the HMD, and the artwork produced by Sixth Formers was then displayed on the day.

A short video was produced for the occasion, based on the theme as put forward by the Holocaust Memorial Day Trust. Then Mr Michael Brown, our guest speaker, made a short presentation, describing his life and experiences through the Holocaust as one of the Kindertransport survivors. Students were able to ask questions. The event was attended by many prominent members of the Council and the local community, including Cllr Sue Sampson, our Mayor, leaders of the Council, local faith groups and Blue Light Services. It was a very special life opportunity that our students and staff will be able to treasure, as we were able to learn first-hand from the experiences of someone who lived through and survived these awful times in our history, and also about Genocides in other countries since.

We were privileged and honoured to attend this year’s Holocaust Memorial Service which was held at our very own school. It was a heart wrenching and deeply moving service which perfectly remembered all of the lives lost in the Holocaust.

We got to hear from Michael Brown who had a first-hand experience of the horrible events involved in the Holocaust. He spoke of how he was given refuge by the Kinder Transport Programme and separated from his family, some of whom he never saw again. We cannot imagine the hardship that he had to endure just for the right to be safe.

The service really put our privileges into perspective and we are incredibly grateful to have been able to attend. Millions of lives we lost during the Holocaust and the really gave us a greater understanding of that. 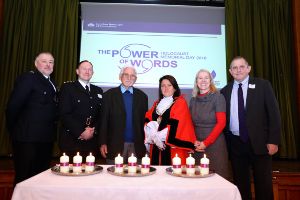